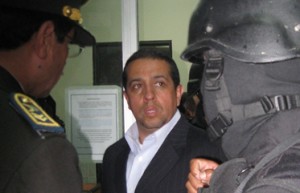 Yesterday after 15 minutes of deliberations, the Penal Court of Pichincha declared the innocence of the Army Mayor Fidel Araujo.

The decision was approved by the judge Gonzalo Morales, Patricio Calderon and Julio Almeida, in a hearing that lasted five hours. With this decision the judges left without the complaint of the government without fundaments through the Ministry of Justice.

The judges assured that their resolution was chosen after evaluating the witnesses’ testimonials and the evidence presented. Araujo could be freed during next’s Wednesday or Friday.

Araujo’s attorney informed that they could sue the Ecuadorian State, since the Mayor was sent to Garcia Moreno prison in Quito for six months.

Meanwhile the D.A. awaits the resolution document to determinate if they appeal on favor of the judges or not. According to Juan Carlos Mendoza, director of investigation for the channel of the State, Ecuador TV, assured that the investigation began when Araujo was seen in the compilations of scenes emitted by the Ecuadorian media of 30-S. Edgar Pavon, the attorney of Araujo defended his client’s innocence against such accusations.

Colombia will Chair the Board of The UN Security This Month