HAVANA- “The Cuban economic model does not work anymore” said Cuban ex President Fidel Castro in an interview he had with the American journalist Jeffrey Goldberg, who writes for Atlantic Monthly Magazine, last week in Havana.

Goldberg asked Castro, 84, about the model of economic soviet communism the island has, which is not adaptable to other countries. “The Cuban system doesn’t even work for us”, said the Cuban leader. Castro’s comment reflected the approval of his brother’s management, President Raúl Castro has launched different reforms to stimulate the obsolete Cuban economy.

Julia Sweig, a Council on Foreign Relations expert that went with Goldberg to Havana, thinks that Castro’s words recognize that “The state plays a mayor role in the economy of a country”. Castro’s consent would help his brother Raúl, who took over  in 2008, to face the members of the Communist Party, who oppose his attempts to reduce state’s leadership, said Sweig to Goldberg.

The journalist wrote on his blog about Castro’s invitation to Havana to discuss his recent Israel and Iran conflict article, United States could take part in it due to its disagreement with Iran’s increasing nuclear capacity. 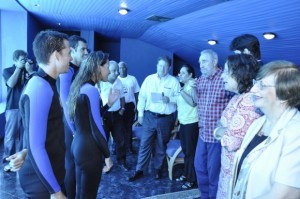 During their visit to Cuba, Goldberg and Sweig visited the National Aquarium and attended a dolphin show.

Extract from The Atlantic:

Fidel called over Guillermo Garcia, the director of the aquarium (every employee of the aquarium, of course, showed up for work — “voluntarily,” I was told) and told him to sit with us.

“What kind of questions?” I asked.

“You’re a journalist, ask good questions,” he said, and then interrupted himself. “He doesn’t know much about dolphins anyway,” he said, pointing to Garcia. He’s actually a nuclear physicist.” 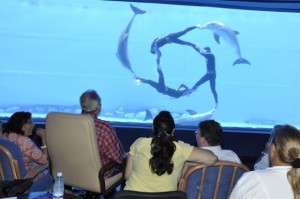 “Why are you running the aquarium?” I asked.

“We put him here to keep him from building nuclear bombs!” Fidel said, and then cracked-up laughing.

“In Cuba, we would only use nuclear power for peaceful means,” Garcia said, earnestly.

Fidel pointed to the small rug under the special swivel chair his bodyguards bring along for him.

According to Goldberg, Castro criticized Mahmoud Ahmadinejad, Iran President, because of his anti-Semitic background and Holocaust denial.

Castro started a movement against a possible nuclear war and has expressed his concern on the future of the world, after getting back on the public spotlight, he “disappeared” nearly 4 years because of several intestinal surgeries that almost lead him to death.

If US and Israel set international sanctions against Iranian nuclear activities, the nuclear war that Fidel fears could become a reality. Castro also condemned his own actions during Cuba’s Missiles Crisis in 62, when he asked Soviet Union to attack United States with nuclear weapons “It was not worth it” he told Goldberg.

The journalist described the Cuban leader as a physically fragile but energetic.

In further days, Goldberg will deal with such issues as the American embargo, the status of religion in Cuba, the plight of political dissidents, and economic reform. The next image is from the day at the aquarium the journalist shared with Fidel. 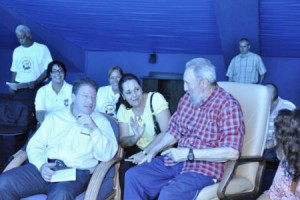 Peace Talks Among Israeli and Palestinian