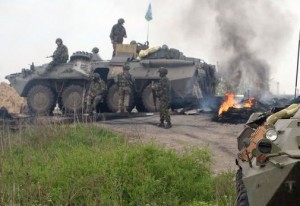 At least five men were killed in an artillery attack in Lugansk, reported the city administration, after new fighting in eastern Ukraine.

Near the Luhansk International Airport, which is closed, the pro-Russian separatists attacked government units with Grad rockets, while in the neighboring Donetsk at least three civilians were killed in new clashes.

Security forces continued their attacks against separatist positions, while insurgents reported heavy street battles in Shachtjorsk, southeast of Donetsk, where the electrical service was suspended.

Meanwhile, the Ukrainian Air Force carried out several attacks after heavy fighting and conquered the Saur-Mogila heights, of strategic importance, near the border with Russia, reported the presidential administration in Kiev.