The messages circulate massively through social networks and web pages . People advertise supposed investments and promise high interest on the deposits they make. 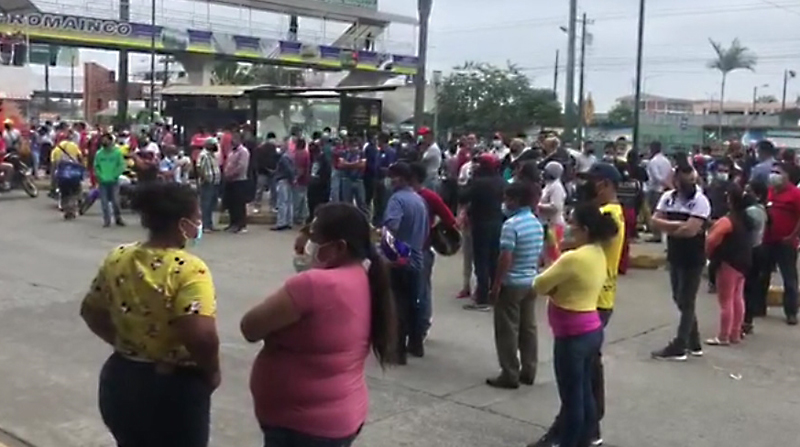 Yesterday, depositors arrived at the Quevedo Prosecutor’s Office in support of the center that collects money.

“Invest and earn 20% per month on your capital,” wrote a user yesterday on Facebook . Another said: “Invest in stocks and make your money grow. Win in a simple and 100% safe way ”. Along with these publications there is a phone number and an email to make contact.

This newspaper found a Facebook group with 61,797 members. It is a platform that offers to earn money online . “Join and win even when you sleep.”

Another publication reads: “With us, your investment plan increases monthly by 15-20% or more than 200% per year. What are you waiting for? It all depends on you, how much you want to put in ”. The message is accompanied by a ‘link’ to join a WhatsApp group.

Agents tracking these cases warn that criminal groups are behind these ads . From January 2020 to last June, 248 people from all over the country alerted the Superintendency of Banks about what is happening, and they said that there are unauthorized platforms that freely offer investments.

This entity registers 118 supposed financial entities of “doubtful origin” that operate without authorization.

But not all report . There are many who do not. Investigations indicate that these schemes are illegal, as they are not regulated by the control authorities.

“They fail to justify what products or services they invest the money delivered in or how the profits are generated,” says a police chief.

Based on documented cases , the uniformed officers indicate that what is deposited serves as a profit for the leaders and for the first investors . Thus they attract more users.

After raising large amounts of money, these illegal networks disappear and people lose everything. Investigators know that drug trafficking mafias also use these types of fraudulent channels to launder money.

In the Police database there is the case of a man who, last February, lost USD 4,000. While checking his Facebook account, he read an offer for a supposed investment scheme and applied .

After entering her personal information, she received a call from a woman who offered to duplicate what she has and deposited into an account they gave her. Then they sent him an access code to a web portal via WhatsApp, in which he could supposedly verify the profits he was making.

After two weeks, the affected person verified that the web page was disabled. The woman who contacted him no longer responded to calls or messages.

The self-styled financial platform that is currently being investigated in Quevedo also moved through social networks and offered a weekly profit of 90% interest on the capital.

Surveys show that around 5,000 people gave up their resources.

Yesterday, many of them went to the Attorney of Los Ríos to support the owner of the collection center. They expect their funds to be returned .

The representative of this platform did not appear at the second call from the Prosecutor’s Office to be able to receive his version. The diligence was called for 10:00 yesterday.

As planned, the testimony would be given electronically, since that was the request he made last Friday.

Today his whereabouts are unknown. But on Facebook he wrote the following: “The Prosecutor’s Office is not helping us so that the disbursement of the securities is done in a responsible manner.”

Intelligence reports show that the networks that collect money not only act locally, but there are also illegal organizations that operate from countries such as Peru , Colombia , Brazil and Mexico .

On January 14, a Cañar court sentenced three defendants for the crime of illegal fundraising. According to the investigations, they convened events in the premises of La Troncal over the Internet.

The appointments took place three times a week and were attended by 200 to 400 ‘investors’, to whom they explained that for delivering USD 1,400 and making four more enter the system, in four weeks they would receive USD 5,600. The investigation says that 70 people delivered between USD 500 and USD1400. No one recovered his principal or received interest.

In Tungurahua and Pastaza otherwise traced. Yesterday 17 suspects were arrested.