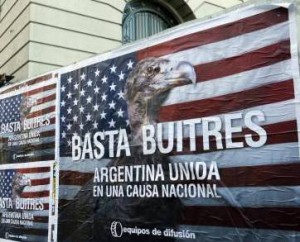 Fintech Advisory, one of the creditors in the case by the argentine debt, is willing to accept a swap of its restructured bonds under foreign law by other issued under Argentine legislation.

David Martinez Guzman, head of the fund, said that the intention of the South American country of changing the place of payment of the restructured bonds in 2005 and 2010 is a correct measure that a sovereign country should take before undue legal attack.

In an interview with the newspaper Página 12, the holder of the Fintech fund expressed its agreement to an exchange of the restructured debt, which will be “a long and complex process.”

He said that the local draft law of sovereign payment “is the right way” that Argentina has to “recover the capacity to conduct its business” and “reconstruct the chain of payments of the restructured bonds.”

President Cristina Fernandez announced on Tuesday the sent to Congress of a draft law to allow the country to cancel its debt under foreign law in Argentina and put pressure on their creditors to convert their bonds to local law.