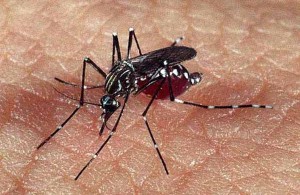 A 15-year-old girl who was admitted ten days ago in the women’s room of the Hospital of Infectious Diseases José Daniel Rodríguez Maridueña, is the first reported case of positive dengue fever.

Symptoms of dengue include fever, chills, abdominal pain and pain behind the eyes, malaise, loss of appetite and nausea.

When small red marks appear in arms and legs, called morbilliform rash, it means fever begins to decrease, that usually occurs between the seventh and eighth day of the clinical picture, and lasts two weeks, said Dino Verni, a infectious disease specialist.

The clinical diagnosis of dengue is positive in this case. “Platelets go down, which means that the hematocrit that is normally 30 to 35, increased between 10 and 20%,” said Verni.

The most dangerous days for the patient with dengue are between the fourth to seventh day after symptoms occur. “In this period virus can transform from classic dengue with hemorrhagic manifestations to a hemorrhagic dengue,” said Verni, who also stressed the importance of patient’s hydration.

A serology test will be performed on the young girl in order to determine if it is dengue epidemiologically.

December 31 Will Be Holiday