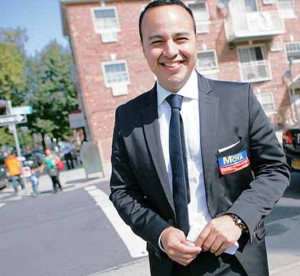 On Tuesday the State Senate of New York elected Francisco Moya as Senator of Immigration for Ecuador. The announcement marked a historical moment, as Moya became the first Ecuadorian working for public service.

“This victory makes me proud as an immigrant and as an Ecuadorian because it’s the first step for our people regarding a career on public service.” Stated Moya during an interview at the Sheraton Hotel were his fellow Democratic Party members celebrated his achievement and that of the Governor of New York, Andrew Cuomo.

In the sixties, Moya’s parents settled in New York and from a young age he began a career on community service in the sector of Corona, Queens. During that time he worked to improve the benefits of legal residents. While studying in the University of Saint Johns he affiliated himself with the Democratic Party. On Washington he was the assistant of Nydia Velasquez, surprisingly he obtained a nomination for the district 39, which was composed by the sectors of Corona, Elmhurst and Jacson Heights.

Francisco’s contender was the Puerto Rican, Hiram Monserrate, former Councillor of New York and ex Senator, however his popularity diminished when he was involved in a domestic violence case with his wife, the Ecuadorian Karla Giraldo. Meanwhile Moya earned a solid victory during the elections, this is the first the Senate of New York would have an Ecuadorian on its directive board.

Millions of Euro Project for the Return of Immigrants