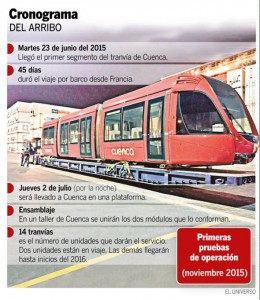 The first tramway that will be part of this transportation system that is being built in Cuenca has just arrived to the Maritime port of Guayaquil. The mayor of Cuenca, Marcelo Cabrera, witnessed the unload of the vehicle, with a weight of 50 tons, which arrived from the Alstom Citadis factory, in France. This is the first of fourteen vehicles that make up the “Tranvia Ciudad de los Cuatro Ríos,” the same that has an extension of 32 meters and is made up of 5 wagons.

According to Jose Merchan, coordinator of the Implementation Unit of the Municipal Tramway Project, it is expected that this automotive arrives to Cuenca the first days of July. Two other trams will arrive next month and Merchan announced that the first trial run will take place in the section that is already completed.