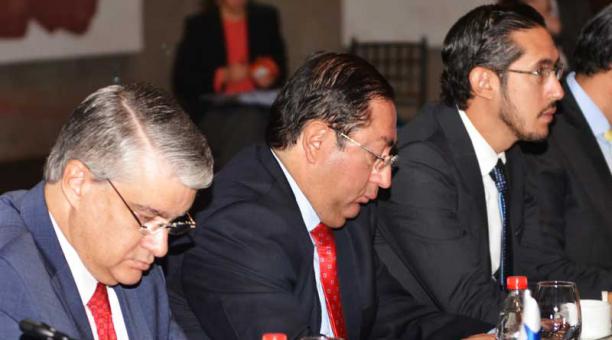 The government could not meet the goal of reducing the fiscal gap in 2017. The deficit, that is, the difference between income and expenses, closed at USD 5 838 million; that is, an increase of 43% compared to 2016 when it reached a figure of 4 090 million.

To fill this gap in public finances, the government had to seek financing abroad, which led to an increase in the level of indebtedness of the State during the past year. Until November 2017, the balance of the total aggregate debt of the country was USD 46 554 million, higher than 2016 (USD 38 136 million). 2017 was also the year in which the Government issued the highest amount of bond debt in the international market since 2014, when it returned to international markets, after having fallen into default or no payment. Between January and October USD5.5 billion in bonds were issued, at interest rates between 8.75% and 9.6%.

The increase in Ecuador’s fiscal deficit, which is among the 10 highest in the region according to the World Bank, can be explained by two factors. The first is that the government did not meet its tax collection goal. Although the two points of VAT were lowered since June 2017 and the safeguards on imports were eliminated, the Treasury set an ambitious goal of USD 14,780 million for taxes. But until the end of the year it raised 802 million less.

The second factor was an increase in spending, despite the austerity policies implemented by the new Government. The item of consumer goods and services (payment of basic services, per diem and other for the maintenance of the State) grew by 10.5% in 2017 compared to 2016. Also, the expenses for payment of salaries to the public sector grew 3%, compared to 2016. This means that an additional USD 270 million in salaries were paid in 2017.

Finance Minister Carlos de la Torre acknowledged that the fiscal deficit rose last year compared to the initial target because the Treasury had to pay unforeseen contingencies, such as the Burlington arbitration and outstanding debts to Schlumberger. He also said that the revenues were affected because certain state assets could not be sold, as the Government had announced. The official confirmed that it is difficult to adjust the item of personnel expenses downwards, because it would be sacrificing doctors, teachers and personnel for the security of the State. The expense that increased the most in 2017 corresponded to interest payments on the debt, which closed at USD 2 516 million, 30% more than in 2016.

For Fausto Ortiz, former Minister of Finance, this reflects that the interest item grows beyond what the economy grows: 1.5% in 2017. Where there was adjustment was in investment, which fell 9.4%. Ortiz warns that in 2018 the gap will be similar if there are no greater efforts to reduce costs. “The level of debt is unsustainable. If it goes on like this, it will require more tax collection to fund the payment of the debt, or reduce subsidies. ” In 2017, Ecuador agreed to USD 10,815 million in financing and by 2018, the needs are 8,253 million. Although the country risk has been falling since last year, for the expert Jaime Carrera this year access to financing will be more complicated and costly, because the Federal Reserve (Fed) of the US Government raised interest rates. (I)