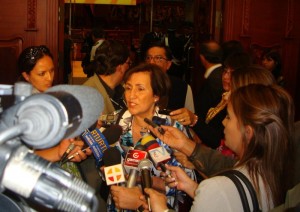 Article 81 of the LOSEP (Public Service Law) says: “Any public employee older than 70 should be removed from his/her job position.”

Several employees were given pink slips due to the implementation of the LOSEP, some of them were part of the founding party.

Ximena Abarca, Deputy Secretary-General of Health, published the resolution during the last days of October. Abarca sent an official letter—which contained a list of employees aged 70 or more— to Yuri Patiño, Health Director of Guayas, it was then passed to the human resources department of Hospital de Guayaquil and then delivered into the hands of workers.

“We’ve been humiliated. The law mentions a pending retirement and compensation, but no one has said anything about that,” said a doctor at the Hospital.

Health Minister, David Chiriboga, said the case of Hospital de Guayaquil will be investigated. “I asked for a detailed report that is not how we want to do this process.”

Chiriboga will ask for a tribute to all employees of the MSP who will retire. And to redeem the experience of doctors he will help them be part of the training younger doctors process.

A total of 200 people across the country (between doctors and workers) will be forced to leave their work activities. The amount they will receive for their retirement would be $36.000—1.000 per year of service—. Chiriboga added that there would be talks between the Health Ministry and the Ministry of Labour Relations in order to set up a rule and enter a process of gradual transition.