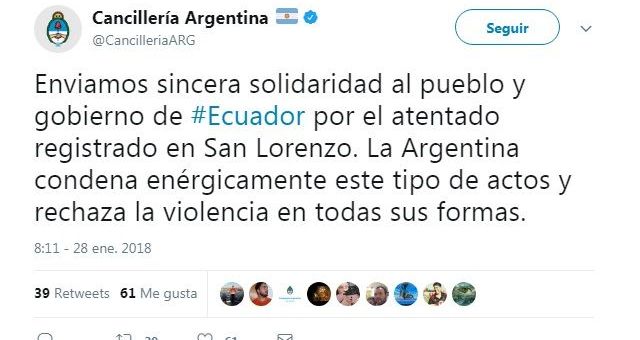 Several have been the messages of solidarity with the Ecuadorian people, above all, with San Lorenzo, who suffered an explosion, this Saturday 27, by a car bomb in the vicinity of the Police Command of the district and left several injured and destroyed homes.

The Foreign Ministry of Argentina pronounced itself against this fact and condemned, vigorously, this type of acts.   “We send sincere solidarity to the people and government of Ecuador for the attack registered in San Lorenzo. Argentina strongly condemns this type of acts and rejects violence in all its forms, “says its publication in the Twitter account of the Foreign Ministry of Argentina.

This message is in addition to the one of the president of Mexico, Enrique Peña Nieto and Pedro Pablo Kuczynsky, president of Peru, who are also in solidarity with Ecuador for the damages caused by drug trafficking groups, according to information from the authorities.

Since yesterday, the state of emergency decreed by the president of Ecuador, Lenin Moreno, is in force in San Lorenzo and Eloy Alfaro, province of Esmeraldas, due to the seriousness of the situation. The explosion left more than 100 people affected, which use the facilities of the church of San Lorenzo as a shelter, because the blast that was generated by the explosion, affected dozens of houses, windows, doors, roofs and buildings in the sector, which were evacuated by members of the National Police. (I)