Former Director of Petrobras was arrested by diverting funds

Last Friday, the Brazilian Federal Police arrested the former head of Services of the company Petrobas Renato Duque, who was involved in the embezzlement of state company to finance political parties allied to the ruling Partido de los Trabajadores (PT).

Duque was arrested during an operation that took place on 5 Brazilian states and in the capital, Brasilia. In total 27 people were arrested allegedly involved in illegal activities.

Petrobras is in the center of investigations into the operation known as “Lava Jato, ‘ which began in March and, according to the Federal Police, the scheme was used to launder about 10,000 million reais ($ 3,850 million) in securities and money of illegal origin.

The case of corruption in the most important company in Brazil exploded when the Federal Police arrested the former head of Petrobras, Paulo Roberto Costa, accused of being part of a network linked to illegal foreign exchange trader Alberto Yousseff, also arrested.

In an attempt to reduce his sentence, Costa signed an information rewarded agreement with the prosecution which he used in order to provide justice with information on activities, participants and beneficiaries of the corruption network. 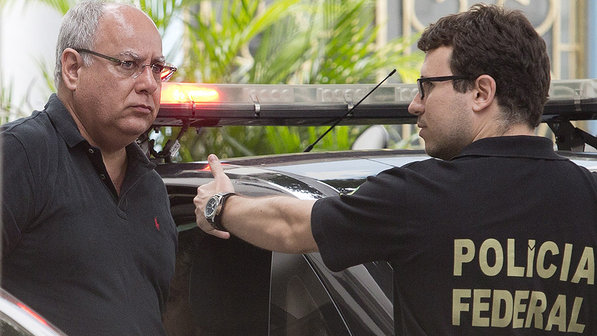 Renato Duque at the time of being arrested.