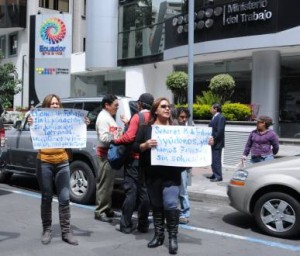 A dozen former employees of the extinct daily Hoy came on the morning of Wednesday, March 4 to the Ministry of Labour to express to the authorities their concerns about the delay in their severance payments and retirements.

Workers said they are 174 the injured for not receiving their payments and 44 of them are still waiting for their retirement pensions.

Jaime Paredes, a spokesman, said that liquidator Edith Duque informed them that after the sale of the assets of the media, which went into liquidation on August, 26 2014 due to insolvency, about $ 3 million were quantified, which would not be sufficient to pay the obligations. So far, the liquidator of Hoy has canceled $ 191,198.15 for salaries of July and August of last year and $ 48,593.54 for the bonuses of the 2013-2014 period.

Last week, the liquidator made a call through various print media in the country to the auction of artworks and automotives that belonged to the closed daily. The sale of its digital archive is still pending.