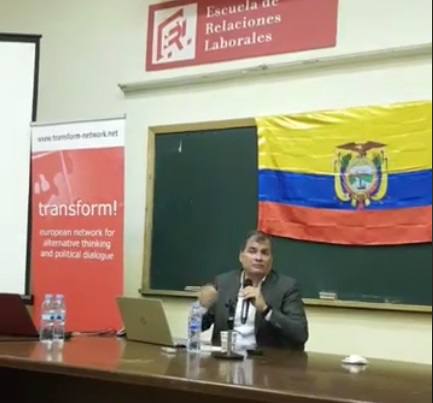 If at some point the Ecuadorian justice calls for preventive detention for Rafael Correa in the case of the kidnapping of Fernando Balda, the former president could request an asylum in Belgium, among other scenarios that he analyzes together with his defenders.

He assured this Tuesday at the Complutense University of Madrid (Spain), where he held an academic event in a seminar on democracy and regional integration.

“They gave me an impossible condition to comply with and they will use that I failed to comply with the precautionary measure and then they will place me in pretrial detention,” Correa said.

“Everything is shielded by imperialism, I want to apologize to the organizers, because only last night I was able to confirm my presence.”

What happens in Latin America is terrible. It is a moment of action and not a purist reflection. It is said that socialism has failed, an example they say is that of Venezuela that has to face this tremendous economic, political, and communications war.

“They want me out of the country, immobilized, but I think it’s temporary … From the ashes of the traitors we will build the new homeland,” he said.

The judge of the National Court Daniella Camacho ruled that Correa must appear every two weeks, starting on July 2, before the court in Quito. (I)