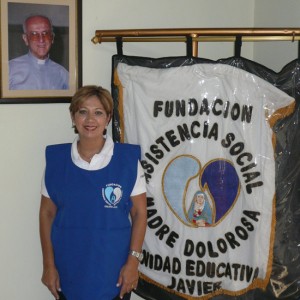 Foundation Madre Dolorosa was created on October of 1988, however similar plans had already been arranged. The initiative came as a message from God and the Virgin to the Priest Ignacio Moreta, our founder. The priest felt a calling and realized that there was potential in the parents of the Javier high school students, soon he called asked them for assistance and many volunteered.

Before the community was formed, the volunteers said that there was a lot of promiscuity and many of the habitants didn’t had any ID, they ate garbage like shrimp shells. This touched the hearts of many volunteers and began to work on the Foundation.

The main function of the Foundation Madre Dolorosa is to serve those in need, the poor of the poor. Offering health and education, they have a school located on the Perimetral that was built near the San Ignacio community, and thanks to the funding of a Spanish institution the land was bought and they were able to build 110 homes. Their motto became “Love to service and to serve lovingly.” Commented Maria Helena de Pilche.

People with no resources who have a sick relative visit the foundation, and their income comes from donations and support. Like the beds that Junta de Beneficencia gives them. Some “godfathers” pay the children scholarships, which cost $120 a year. Generous Private industries also give money for education, and from the monthly pay of the Javier High School $3 are given to the Foundation. “God provides and when the things are from God… they arrive.” Words that the late Priest Moreta used to say.

Most of the cases the Foundation attends are related to health and education, they have a medical facility with them ready, but since there are similar centres around they are planning to disband it. Since most of their difficulties are budget related.

Currently the Foundation has a Hospital in Savanilla, which attends only during the day, from Monday to Saturday. However the difficulties they affront are also budget related since they can’t pay for all of the chemotherapy treatments. Now the Foundation is focusing on the sections they need and discard those that are no longer of use, since the new government policies provide free health for those that can’t afford it.

When asked if they knew the work of Crusade for a New Humanity Foundation, Maria Helena de Pilche remembered when it was just starting as well and that it belongs to the philanthropist Alvaro Noboa. However they have lost touch but are interested in working together so more people can be helped.