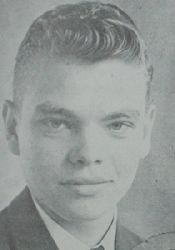 “Handle with care the school yearbook to prevent its damage. And then ask the librarian of the institution, Teresa de Mino, to soon bind it,” says brother Alfonso Armijos, headmaster of the San Jose La Salle de Guayaquil School, while he pases his fingers through the yellowed photographs and speaks wistfully of four former students who today make news: they are candidates for the presidency of Ecuador.

He was not the teacher of them all, but he remembers perfectly young Jaime Damerval (CFP), Alvaro Noboa (Prian), Carlos Sagnay de la Bastida (Eclectic movement) and Rafael Correa (Alianza Pais), being educated within the green walls of the school.

The yearbook of his class says about him: “Cradled with the cooing of the Pacific, he grew up meditative, anxious to know the whys of things; He likes to raise questions. In life, Jaime will go far …”

Unlike the others, the Prian candidate was not entirely educated at La Salle. His father, banana magnate Luis Noboa Naranjo, sent him to study at the exclusive boarding school Le Rosey in Switzerland. There he shared the classroom with the Rockefeller heirs.

Sagnay de la Bastida finished school in 1974, with a specialization in Physics and Mathematics. Guillermo Lasso, former governor of Guayas and president of the Bank of Guayaquil, graduated the same year.

Correa belongs to the Class of 1981. He got a specialization in Physics and Mathematics. His farewell reflection can be read in the yearbook: “With my life I will try to be grateful for what this school gave me.”

Brother Armijos _ recalls that “the four were good students.” And in fact, in the reports they appear in the first twelve places with “outstanding” grades.

Sagnay de la Bastida, however, was the best. In 1973 he was named the best student of his class. He also received Lasallian gold medal.

Damerval belonged to the “Academy of Literature,”a group of students interested in journalism, led by Brother Pablo Armijos. The boys published the magazine La Opinion.

The other three belonged to the pastoral movement in charge of the project called “Lasallian Wardrobe,” which consists of collecting clothes and food to distribute in the Christmas eve. Correa was also a leader of scout groups.

Brother Alfonso, who has worked for 52 years in the school-  recalls that the Alianza PAIS candidate was the most restless, the most vehement. So much that sometimes they had to take him out of the library because he did not let his classmates study.