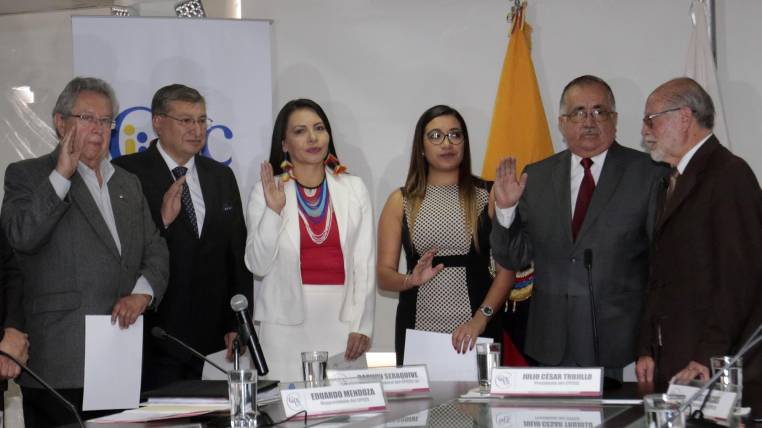 The Council of Transitional Citizen Participation has 28 days left to conclude with the evaluations of 17 public officials appointed by the previous organism, which was ceased in the referendum on February 4.

In five months, the Participation Council has fully evaluated three entities: the Council of the Judiciary (CJ), the Superintendency of Banks and the National Electoral Council showing a balance of 11 dismissed officials, 100% of examinees.

Carlos Ochoa is added, who left the Superintendence of Communication by the Comptroller’s disposition; Patricio Rivera, who was declared the early termination of the position in the Superintendence of Popular and Solidarity Economy to be 235 days after being appointed and the Ombudsman, Ramiro Rivadeneira, who ignored the evaluation.

Also pending is the ratification or not of the resignation of the Superintendent of Companies, Suad Manssur. This evaluation is in the last stage, the one of impugnation, and the resolution could be given next Monday.

What is lacking? The Councilor for Citizen Participation, Pablo Dávila, told EXPRESO yesterday that it remains to evaluate the Contentious Electoral Tribunal which has five members; to the holder of the Superintendency of Territorial Ordinance, Fernando Cordero; to the nine members of the Constitutional Court (CC) and two designations made by the previous Council to the Social Security system.

“The important thing about all this is that all the investigations of the missing entities have already started, the investigation process, which is the longest part, is about to conclude or has ended,” Dávila said.

What remains in these five cases is to transfer the investigation reports, receive the discharges of the evaluated authorities, convene the hearing, prepare the resolution report, open the challenge stage and make the final decision. This should be evacuated in the next four weeks.

But so that the time does not fail, next week the transitory advisors of Participation and their work teams will receive a schedule with specific dates and activities to avoid the violation of the third annex of the referendum, which gives until August 31 to complete the evaluation process.

“I would understand that we are going to finish the evaluations until the determined date. We cannot go beyond six months and that is why we will be given an agenda by secretariat of the missing items and the tentative dates, “said counselor Xavier Zavala.

There are also entities that dodged the evaluation for different reasons. Diego García resigned from the Attorney General’s Office in January, before the transitory Council was installed; In the Superintendence of Power of Market Control, Pedro Páez had his term in August of 2017 and he did not have a replacement yet.

In the Comptroller’s Office, Carlos Pólit resigned and is now a fugitive from justice for the Odebrecht case and in the General Prosecutor’s Office, Carlos Baca Mancheno was censured by the National Assembly, before the evaluation.

The Participation Council took over yesterday the five transitory members of the National Electoral Council. In the afternoon, the organization had its first session, in which its executives were elected. Gustavo Vega was appointed as president of the organization that will be valid for no more than 60 days. Meanwhile, Diana Atamaint was chosen, unanimously, as vice president.  (I)