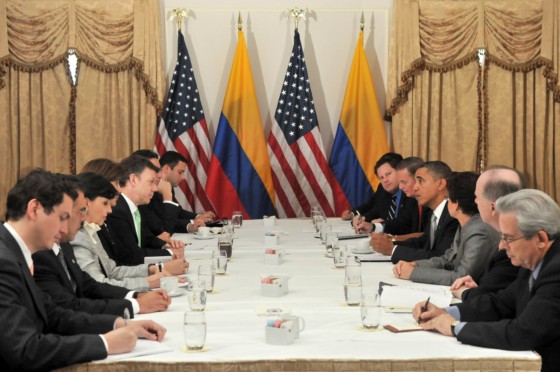 Colombian president, Juan Manuel Santos, said yesterday that after the first measures implemented for the protection plan of labor rights, there is still pending the submission of the Free Trade Agreement (FTA) with the United States Congress to initiate on 22 April.

Leaders of both countries announced a forthcoming Action Plan on employment rights as contrasted by a series of dates and specific measures that should be applied in Colombia to ensure these rights.

Santos’ government would have to spread its agenda of police protection for  union leaders and teachers threatened since April 22, according to the plan proposed by the White House. Thus, the action plan would open letter to the TLC.

“(…) this will provide the basis for progress in the FTA between U.S and Colombia” Obama said in announcing the plan of action without compromising any date.

With the exception of Ecuador, all the banks of the Pacific would be met with FTA agreements after Colombia and Panama culmination of the negotiations with the U.S.