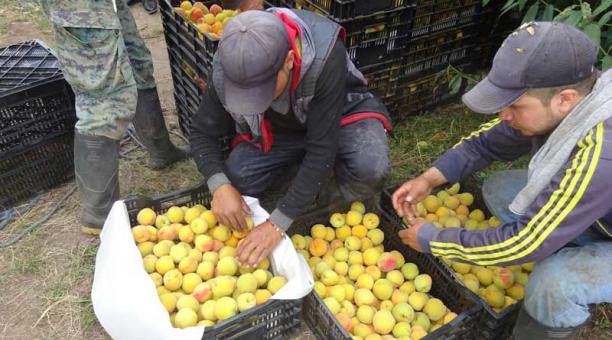 The fruits of avocado, mango, peach, strawberry, uvilla, among others, colored the fields of Imbabura in the last decade. With an approximate extension of 4 500 hectares, the ‘Province of the Lakes’ is today one of the main fruit orchards in the country.

According to Wilson Escobar, a technician from the Ministry of Agriculture, this production has been growing rapidly and displacing even traditional crops in the area, such as corn (which has 5,800 hectares sown) and beans (2,583 hectares). While walking among bushes with the branches hung by yellow peaches, Arnulfo Armas, producer of Pimampiro, explains that the change of plantings was determined by the market.

He remembers that before in this imbabureño canton basically tomato was cultivated. However, the price of the box of 12 kilos fluctuates between USD 3 and 15. That discouraged many farmers who opted for the so-called perennial fruit trees, which generate better income and because their prices are more stable.

On February 15, 2018, for example, the first quality peaches (20 kilos) drawer sold for USD 20. The second for 18 and the third for 16. Armas also produces mango, orange, tangerine and avocado , in a family estate of 24 hectares. In the lands surrounding the valley of Chota, meanwhile, the tuna, the cucumber and the watermelon bloom.

The varied climatic floors of the province guarantee a diverse fruit production. That’s another advantage, says Escobar. Another convinced that the future of the country is in the fruit trees is Marcelo Reinoso, president of the Federation of Fruit Growers of the North.

Reinoso believes that the fruit production of the Sierra Norte can now be compared to that of Tungurahua. He adds that the success lies in the good management of gardens and associativity, which will allow them to meet the demand for food such as avocado of the hass variety, which has a very dynamic market in other countries.

On a national scale, there are 6,700 hectares planted with avocado trees. Of these, 3,000 are in Imbabura and Carchi. Despite the potential of the avocado, farmers in the region say they cannot yet meet all orders.

Jorge Altuna, head of Corpoaguacate, an organization that promotes the cultivation of fruit for export, says that there are requests for between two and three containers a week, per client. In the northern Sierra there are more orchards where the strong variety is cultivated, which has more local reception than the hass.

Although these fruits do not have resistance for travel. In spite of everything, the previous year 50 tons of avocado were exported from Pichincha, Imbabura and Carchi, says Altuna. “They were sent between 3,000 and 4,000 kilos, from the Sierra. 300 tons were shipped from the Costa plantations. ”

In the effort to improve production, Corpoaguacate and Globalforum are organizing an international seminar on cultivation and export. The appointment will be on February 23, 2018, in Ibarra. Sebastián Muñoz, from Globalforum, indicates that Imbabura was chosen because it is a new quarry for this fruit.

He also reported that specialists from Peru and Colombia have been invited. Both countries precisely dominate the world market. But, while avocado is an endemic product, mango and peach are considered innovative crops in the Sierra Norte.

Luis Vallejo, administrator of the Association of Agricultural Producers of the valley of Chota (Asoprovalle), says that everything started 15 years ago. An organization brought plants from the Litoral region, to experiment. The warm climate and the fertile land gave satisfactory results.

Currently, there are 300 hectares planted with mango of the variety Tomy Atkin. Unlike the Costa, where it is harvested between October and January, on the banks of the Chota River there is this fruit throughout the year. When production decreases in the coastal provinces, the mango is sent from the Imbabura and Carchi farms throughout the country. They also meet the requirements of national and Colombian commercial chains.

Wilson Escobar highlights that the new dynamics in terms of fruit production in the region have allowed the development of organizational spaces and own technology. One of them is the so-called Biprovincial Table of Fruit Growers of Imbabura and Carchi, which brings together producers, technicians and authorities.

But there is still a lot to do, such as offering preferential credit lines, says Reinoso. He also explains that there is a potential in the exotic fruits that the country has. In as much, the producers continue working. In this sense, organizations such as Asoprovalle are building a place to group production. But, in the medium term, they plan to transform the fruit into pulp and juices with their own brand. (I)

Decree to prevent the abuse of migrants