The Ministry of Finance temporarily transferred $ 300 million from the Solidarity Law. The vice president of the Assembly asked Minister Carlos de la Torre to attend the Legislative.

On December 29, 2017, the Ministry of Finance transferred $ 300 million of the resources obtained through the application of the Organic Law of Solidarity to the Single Treasury Account for the closing of fiscal year 2017, an amount that, according to the technical secretary of the Committee for Reconstruction and Productive Renewal, Carlos Bernal, does not affect budget programming. With a cut-off to September 17, 2017, with the proceeds from the Solidarity Law ($ 1,501 million) that came into effect on June 1, 2016 and added to the contribution of international organizations and the private sector, the country has raised $ 2,814 million, of which $ 821.43 million have already been executed, while there remain 261 projects for approximately $ 166 million. In addition, 174 projects totaling $ 806 million are being planned.

“Within this area of planning and those that are in execution, there are the $ 300 million that the Minister of Finance (Carlos de la Torre), depending on his attributions and in compliance with the law must reintegrate, as the funds go demanding, “the official explained to this newspaper. 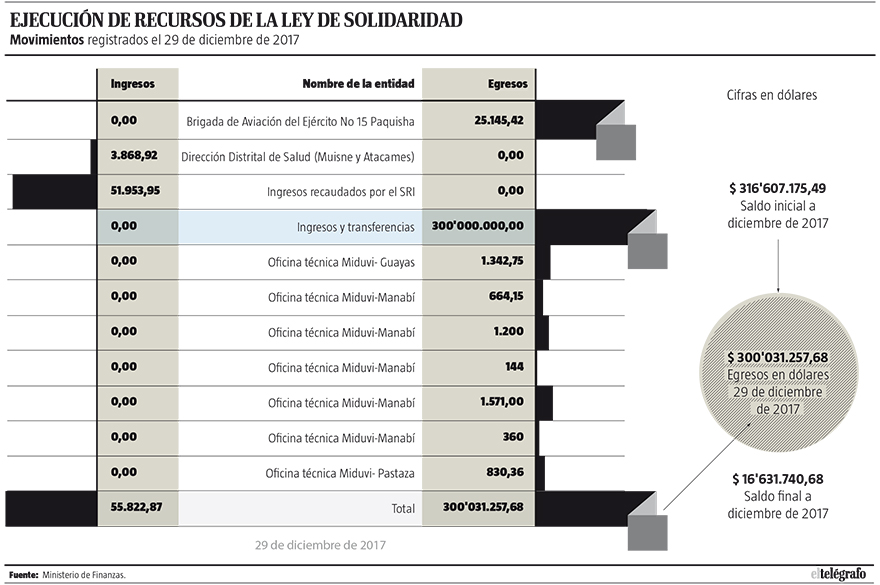 He emphasized that resources are guaranteed in the development of the reconstruction plan and are available for the allocation of resources. In an interview on the Manavisión channel, the Finance Minister, Carlos de la Torre, explained that although the funds for the reconstruction of the areas affected by the earthquake on April 16, 2016 are from the State and a momentary transfer was made to The Treasury Single Account for the closing of the fiscal year, the money will be returned in the coming weeks to be used as the planned works are developed. Bernal stressed that this transfer made on December 29 should not cause concern in the population, because the money raised is specifically for the reconstruction of the affected areas and that investment is guaranteed for the items of housing, roads, health, education, support productive, sanitation, electrification, among others. In spite of this, the official will send the Ministry of Finance a document requesting him to indicate the date of the availability of these resources.

The assemblywoman of the province of Manabí by the party Creating Opportunities (CREO), Tanlly Vera, indicated that within the scope of its competence, yesterday requested, through the secretary of the National Assembly, a special examination by the Comptroller on this transfer made. He added that on Wednesday he will ask in the plenary session for a change of agenda to request that Minister De la Torre appear in the Legislative and explain why the funds were taken.

The vice president of the Assembly, Carlos Bergman, confirmed to this newspaper that he sent a request to De la Torre to attend the Legislature to detail the transfer. In Manabí, the vice president of the Anticorruption Committee, Patricio García, pointed out that it is not taken into account that in the province there are still unfinished works. He cited, for example, that there are pending works in hospitals in Bahía de Caráquez, Chone, Portoviejo and Manta. Neither has progress been made in the construction of the new terminal at the Eloy Alfaro airport, he said.

The third general provision of the Organic Law of Solidarity indicates that the net resources obtained from solidarity contributions must be managed by the Ministry of Finance in a single account. 2 years and nine months have passed since the earthquake that affected Manabí and Esmeraldas.

The Secretariat of Reconstruction has made a plan to carry out works in the next four years. (I)