Funds Law will enter to second debate this Thursday 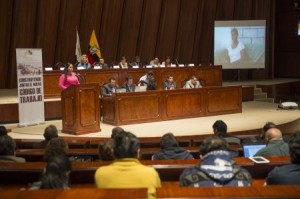 This Thursday will be held the second debate for the draft amendments to the Law of the Ecuadorian Institute of Social Security (IESS for its Spanish acronym) and the Affiliate Bank (Biess). This, after the report on the bill was approved yesterday.

The reform proposes that 54 closed-end funds, which accumulate savings of  workers (USD 936 million), are henceforth administered by the Biess.

“Their management will be subjected to the principles of security, transparency, solvency, efficiency, profitability and to the regulations and controls of the pertinent entities”, the report stated.

It is further clarified in the document that these funds may maintain their own management with the express request of more than a half of its participants with the following conditions: That it is proved that contributions to the fund were made ​​voluntarily, that the resources could be returned to their holders at any time they request, that the value of state resources received by the fund are reinstated with the respective interests.