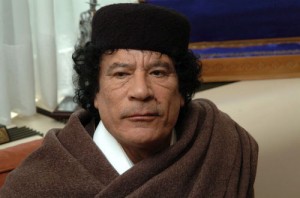 Muammar al Gaddafi, who has been in power for 42 years, answered the recent riots and protests against his regime by bombing the supposed saboteurs who are brewing terror in Tripoli. The air bombing from the Libya Army left a total of 250 people dead.

Saif al Islam, son of Muammar, stated that the planes of the Armed Forces bombed weapon storage facilities located in urban areas; he denied any comments that the attack involved innocent civilians. However, the citizens from the neighborhoods of Tayura, and Fashlum informed that there was a massacre in their sector and several dead bodies lay in the streets. According to an ONG report over 400 people have perished in the last six days.

Meanwhile in the city of Benghazi the demonstrators seem to be in total control, several government buildings were looted and burned. The Libyan coronel remains in Tripoli. Today Gaddafi appeared in the State television to deny any rumors about him leaving to Venezuela.

The Libyan leader addressed supporters to criticize the people that are trying to undermine the stability of the country. Meanwhile in eastern Libya, armed groups guard the streets as opposition leaders. Gaddafi reinstated that he will not abandon the situation and he will die as a martyr. The Libyan leader blamed the foreign media by saying that they work for the devil. This is the first declaration made by Muammar since the beginning of the protests. Finally he said that those that rise in arms against the country will be sentenced to death.