Galapagos: The archipelago where conservation and tourism converge

Galapagos, where more than 90% of its population depends on tourism, is experiencing signs of recovery with a firm commitment to conservation, backed by the recent initiative announced at COP26 to extend its marine reserve. 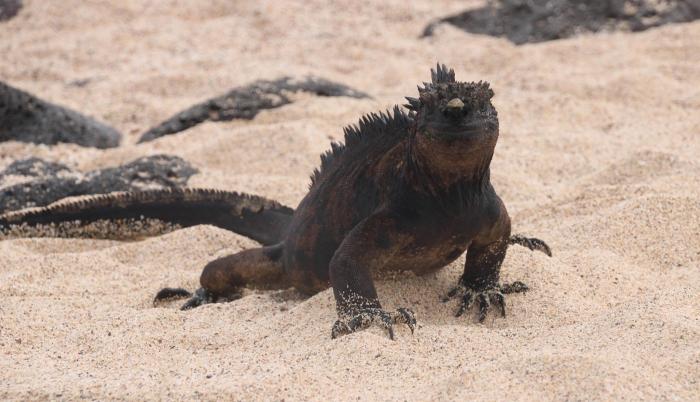 The archipelago is a Natural Heritage of Humanity.

“Expanding the reserve from 138,000 to 200,000 square kilometers is one of our commitments to nature,” Ecuadorian President Guillermo Lasso said Thursday at an investment forum, referring to the project presented at the Glasgow summit, which he defined as ” the largest debt-for-conservation swap ever made in the world. “

Pending completion, the archipelago declared in 1978 the First Natural Heritage of Humanity by UNESCO, thus returned to the international focus and did so with the environmental guarantee represented by the conservation of its emblematic species, converted into tourist lures.

With more than 92% of the population immunized against covid-19, Galapagos tries to leave behind the harsh months of the pandemic in 2020, when its main activity was paralyzed and many of its inhabitants returned to barter to survive.

“Galapagos is above all about nature. Everything is focused on conservation because the islands are a ‘hot spot’ of species that you cannot find anywhere else in the world,” said Ana Moya, executive of Finch Bay, a resort that has in conservation one of its main claims.

The manager acknowledges that the survival of the sector, used to receiving thousands of foreign tourists, had to look to the national visitor since 2020, who, thanks to promotions, kept the activity afloat.

Now it seems to be going up again and, as of October of this year, 83,190 people had visited the archipelago, of which 64.2% were national and 35.8% international, reflecting a trend that has begun to balance out in recent months.

“Little by little the foreign market is returning to the country,” says Moya, who trusts that the announcement of the new reserve will serve as a catalyst for that tourist who values ​​nature and seeks a different experience of the sun and the beach.

NATURE IN ITS PUREST FORM

With unparalleled biological diversity and inhospitable landscapes that in some islands turn Martian, in this volcanic archipelago it is possible to feel how evolution followed its paths.

The naturalist Pablo Ribadeneira highlights the different types of habitats on Santa Cruz Island depending on the altitude: “In the coastal area we have a predominance of gray cactus forests; after 300 meters the humid transition area with dense vegetation of up to 15 meters, feeding area of ​​the turtles “.

Located about a thousand kilometers from the mainland, and crossed by the equatorial line, the archipelago is made up of thirteen large islands, nine medium ones and a hundred islets, and is home to more than 7,000 endemic and native species, among them, the emblematic Galapagos that they give name.

“From tourism we show what makes the islands famous: their endemism,” explained José Hurtado, a National Park guide who uses the native marine iguana as an example, which can submerge more than 15 meters and stay 20 minutes under Water.

Although it may seem contradictory, for this instructor there is a perfect symbiosis between tourism and conservation on the islands, which are as dependent on human visits as on animals because “species do not know borders”.

The projected marine reserve will add to the 133,000 square kilometers of waters already under protection that make it the second on the planet, and which is inhabited by 95% of unique species according to the records. In total, it will have 193,000 kilometers.

At the climate summit, a multilateral agreement was also signed to expand environmental protection over some of the regions considered “richest in biodiversity in the world”, which, in addition to Galapagos, include Coco Island in Costa Rica, Malpelo in Colombia and Coiba in Panama.

“We know well that this area is one of the centers of reproduction of sharks,” Hurtado recalled before mentioning the threat of international fishing fleets that wait in waters bordering the current reserve to capture species that transit through the so-called Eastern Pacific Marine Tropical Corridor.

Galapagos will thus cease to be at the center of bitter environmental debates about its maritime perimeter, to focus on a recovery with a mark of sustainability.

This is seen in initiatives that seek to offset the carbon footprint in some hotels, or in flight, such as the one developed by the Latam airline, which also separates waste in the cabin, beyond the required disinfection of luggage to destroy invasive biological agents. .

“What we want is for people to come who want to become an explorer, understand how our entire ecosystem works, learn about Darwin’s theory and animals, because without animals we have nothing,” concluded Moya.