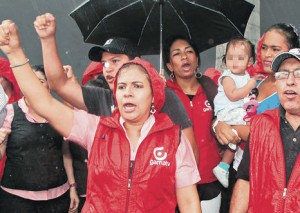 The seized Gamatv channel has kept its workers in arrears for at least thirteen months with the Nacional Finance Corporation (CFN). This is because the television station fails to meet quotas for the purchase of the 22% of the shares delivered by the Government ( $ 5.6 million) in July 2011.

The CFN has already notified the Pacifico Teledos Television Workers Trust, which handles the stake and also warns that the ‘nonpayment is affecting the CFN portfolio.’

Until November 6, 2013, Gamatv already had 175 days of arrears (six months ) and the maximum payment date was on October 25 of that year.

According to the sale contract of CPG with which the shares were traded, the CFN should proceed to give ‘an end to the term … and proceed to the court collection of the debt.’ This means ‘collection via legal or coercive and seizure of the shareholding.’

Christóbal  Buendía, legal adviser of the workers trust, explained that non-payment is due to the failure of the directors of the channel, the commercializing of hourly stripes which are property of the employees, whose values ​​have been collected and entered into the accounts of the company, but have not been transferred to the payment of the CFN credit.