General Gabela avoided the purchase of the Dhruv helicopters twice 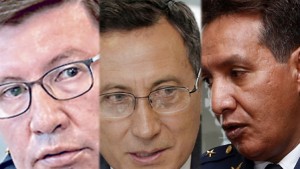 The International Relations Commission of the National Assembly resumed the investigation and summoned former members of the procurement agency of the Ecuadorian Air Force (FAE) to provide their versions.

Alonso Espinosa, retired General of the FAE; Jose Herrera, a former prosecutor, and Gustavo Gavilanez, former Secretary of the Procurement Committee of the FAE, were present. The session, unlike the appointments to discuss the issue, was not reserved. The press had access.

What did they say? The military explained that due to the intervention of former commander of the FAE Jorge Gabela, two of the four tenders were declared unsuccessful.

In an extensive document, drafted by the then Secretary of the Procurement Commission, Gustavo Gavilanes, it is detailed that Gabela put pressure to rescind the award to the Indian company HAL. In addition, the officer, murdered in 2010, did not deliver the documents to notify the winning bidder, as determined by law.