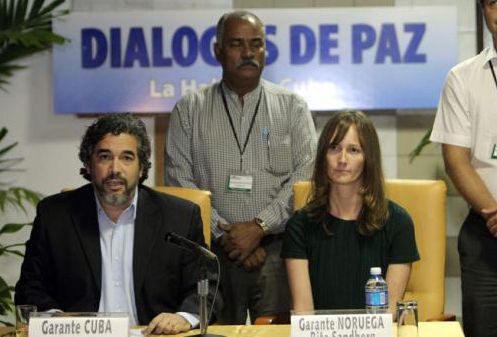 Rodolfo Benitez, guarantor of Cuba and Rita Sandbergen, Norwegian representative in the peace talks between the Colombian government and the FARC. Photo: EFE

The FARC and the government of Colombia agreed the conditions to release “as soon as possible” a general and four other captives in the hands of the rebels, announced this Wednesday diplomats from Cuba and Norway.

“The parties have agreed on the conditions for the release” of Gen. Ruben Alzate, lawyer Gloria Urrego and three other soldiers, which “will be undertaken as soon as possible,” said the Cuban diplomat Rodolfo Benitez, together with his Norwegian colleague Rita Sandberg.

He said that “the releases will take place as soon as possible,” without specifying a deadline. Nor they did stated when will the peace talks resume.

Cuba and Norway are guarantor countries of the peace negotiations in Colombia, which on Wednesday marks two years, and were suspended on Sunday by Colombian President Juan Manuel Santos after the capture of Gen. Ruben Alzate and his two companions by the rebels in a rural area in the west of the country.