This company participated in projects of the Ministry Coordinator of Production, which was led by Vinicio Alvarado. Rafael Correa defends him. In the case of influence peddling and tax evasion, the Alvarado brothers’ companies would have incurred according to the preliminary conclusions reached by analysts and assembly members, after hearing the report of the Financial and Economic Analysis Unit.

That report caused the Prosecutor’s Office to initiate a preliminary investigation against the former ministers. In the report, which was carried out between 2010 and 2017, the Unit detected that the financial movements of the accounts and companies of Vinicio and Fernando Alvarado, as well as that of their family, were “unusual and unjustified”. In those years, Vinicio Alvarado was secretary of the Presidency, secretary of the Public Administration and holder of the tourism portfolio and the Ministry of Production.

In contrast, Fernando Alvarado was Secretary of Communication and Minister of Tourism. The researchers called attention to the income of the company Creacional, for more than $ 124 million. Said entity had as clients, such as public and private companies, like General Motors of Ecuador, Claro, Tía and a series of communication media, including Gamavisión, TC, Teleamazonas, Ecuavisa, RTS and Canal Uno.

Among the movements of the company stand out the $ 4.6 million that left the country. Also, Alvarado must clarify before the State Attorney General about the contradiction regarding the companies’ income. For example, the income of Creacional for $ 124 million is not equivalent to the payment of income tax. In this case it is surprising that in 2015 the company has not made a single payment and that in 2016 the cancellation was $ 25,969. 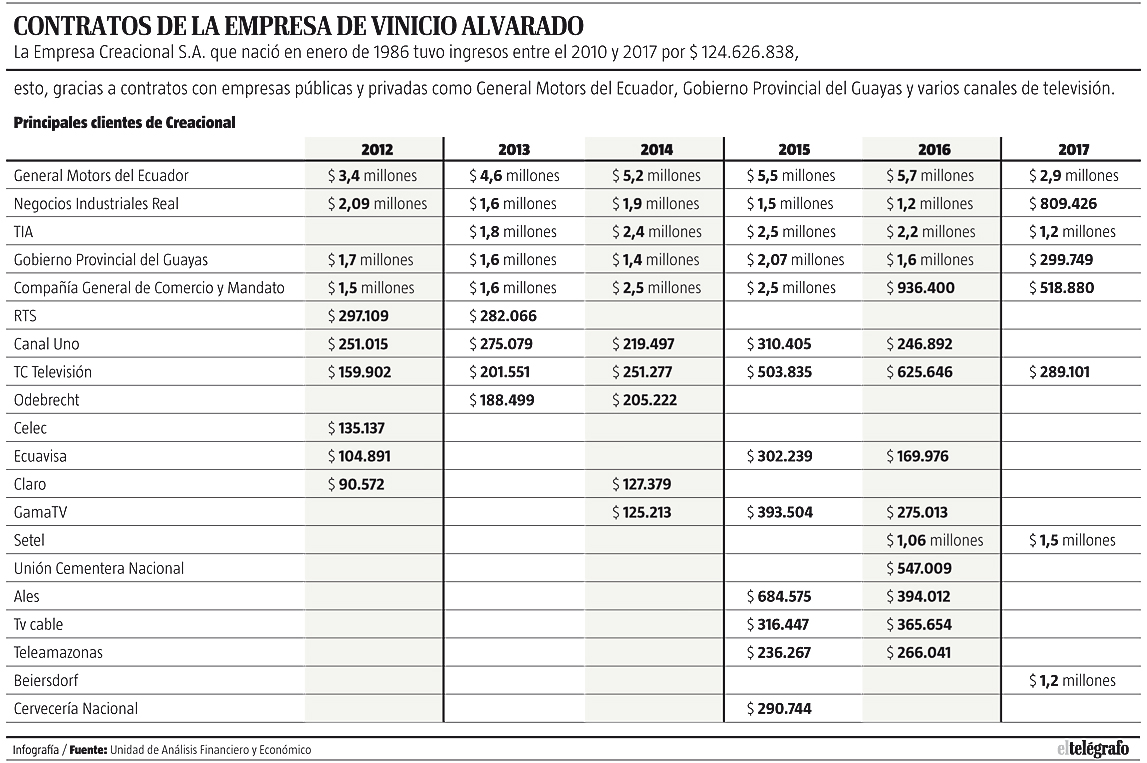 “That does not correspond to the high level of volume that had the economic movement of that company,” said Jorge Orbe, economic analyst. The professor also indicated that the Prosecutor’s Office has the responsibility to investigate whether there was influence peddling by the Alvarados in the exercise of their public functions with projects related to State companies.

For the investigation to advance in the Office of the Prosecutor, it is proposed that the Comptroller General of the State investigate the public sector companies that made contracts with companies related to the Alvarado family.

27.3 million in contracts between Creacional and General Motors

Orbe highlighted the contracts made by Vinicio Alvarado’s company with General Motors del Ecuador. Between 2012 and 2017 there were contracts for $ 27.3 million.

The former Production Coordinator in the Correa regime participated in several official activities with the company. For example, in the inauguration of the production cell for the new model that the General Motors-OBB of Ecuador company put on sale in 2017, which occurred on December 16, 2016. In addition, General Motors is one of the main promoters of the First Ecuador Campaign, initiative of the Production portfolio. For the lawyer Milton Castillo, who investigated the Alvarado, since May of 2017 and discussed how Vinicio Alvarado “manipulated power” in favor of him and his companies.

He assured that the former official benefited General Motors in exchange for advertising through vehicle operation and import quotas. He concluded that the relationship between the agency Creacional and General Motors contravenes what is established by the anti-corruption law of the United States, which prohibits the business of US companies with high public officials.

“A contract between a North American company and a company where the manager is a public official can be considered as a screen to violate the law,” he said. Luis Pachala, legislator of the CREO movement, affirmed that there is no doubt that much money from the State went to the Alvarado advertising agencies. He said that they must also be investigated by the uninterrupted national network of September 30, 2010.

The prosecutor Carlos Baca Mancheno said yesterday that the investigation of these movements is open. “We have a constitutional obligation to conduct these investigations in a legal and objective manner,” he said at the same time that he confirmed the opening of a preliminary investigation into the management of public and seized media after the complaints made several months ago by the company’s manager of Public Media, Andrés Michelena, who informed that the Gamavisión and TC Televisión channels recorded losses of close to $ 23 million during the last 10 years. For his part, former President Rafael Correa defended the innocence of his ex-collaborators in a Twitter message. (I)