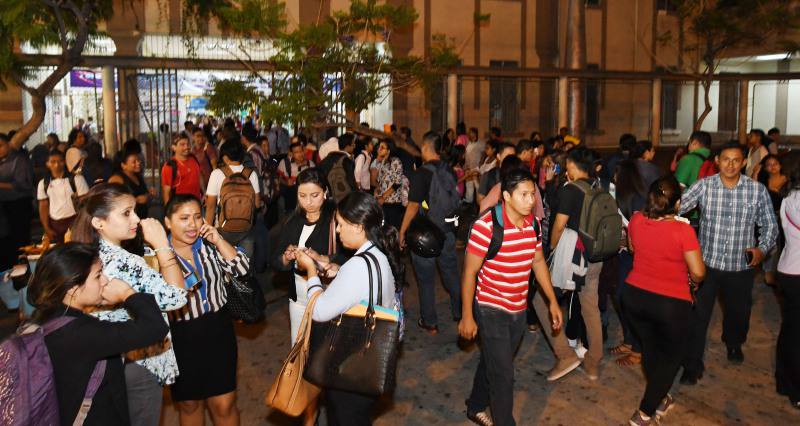 In some sectors of the city, people came out of their homes and buildings to the street, looking for an open space. At least one hospital, technological institutes and universities activated their evacuation protocols due to the tremor that occurred on Monday night, at 9:04 pm.

Initially, through its Twitter account, the Geophysical Institute of the National Polytechnic School reported that the telluric movement had a magnitude of 5.4 with epicenter in Guayaquil and a depth of 30.24 kilometers.

But later, in a report published on its website, reported that the magnitude of the event was 5.0 to a depth of 65.1 kilometers and that the epicenter was located between the north of the main port and the south of Nobol.

The shaking was accompanied by a noise that was perceived by several people. The Secretariat of Risk Management reported that no victims or major damages were recorded, only in the La Merced church, in the center, part of the cornice was detached. Yesterday, at dawn, there was another earthquake.

Sandro Vaca, seismologist of the Geophysical Institute, explained that the telluric movement originated in the interior of the Nazca oceanic plate, in its process of entering under the continent (subduction).

“The plate as such accumulates efforts (elastic energy) inside. Then, at a given moment these efforts exceed the strength of the rock and there is a break, a failure of this plate. When this happens, it is when an earthquake occurs or is experienced as such, “she said.

Vaca said that the earthquake that occurred on November 17 had a similar origin. However, she stressed, it cannot be said that the tremor of Monday is a replica of the last one.

On the other hand, Marcelo Moncayo, professor of seismic engineering at the University of Guayaquil, considered that Monday’s event would be a replica of the first earthquake, because it happened in a nearby area and was of less magnitude.

Based on information from the North American Geological Survey (gave a magnitude of 5.0 and depth of 70 km to the earthquake on Monday), Moncayo, with a master’s degree in Seismology in Japan, said that this movement was caused by a system of geological faults that the city has both the north and the south areas.

The latest earthquakes, he said, show that these failures have been activated, which is a seismic threat. In 1982 the faults of the south caused an earthquake of magnitude 6.1. The same happened in 1943, with the failures of the north. “It does mean that we should be alert,” he said. (I)

Cybermonday was extended for two days and exceeded expectations