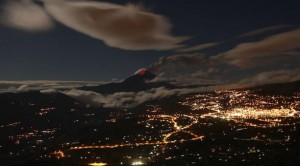 The Geophysical Institute of Ecuador reported that the activity of the Tungurahua volcano has been gradually increasing since August 1, 2014.

The bulletin issued by the agency said in recent days reported that the activity of the Tungurahua volcano has had the presence of constant emissions of gases with low to moderate black ash.

“It is believed that the volcano and its surface manifestations are responding to a sustained rise of a magmatic body that has failed a quick exit to the surface”, the statement said.

Technicians noted that the “continuous record of tremors and explosions are signs of a very disturbed magmatic system and probably close to produce an eruption of greater intensity and magnitude within a period of days to weeks”.

Hoy’s workers will be unemployed from September