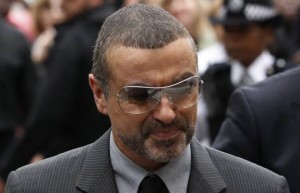 George Michael, 47, got his freedom back today. The singer was sentenced 2 months of prison for marihuana possession; apparently he was under the effects of narcotics while driving.

“I just want to start again. It’s fantastic to be out. It’s a beautiful day. I just want to say thank you for everybody who has supported me in there, it’s quite inspirational,” said George to the media while entering his home in London.

“You’re going to be seeing a lot more from me. I’m not going to be running away from you guys anymore…by the way, I’ve just thought of a really good song. It’s gonna have nothing to do with prison,” he told photographers outside his home.

The pop singer was released a month before completing his sentence and was also banned from driving for five years and heavily fined after pleading guilty to the offences, which stem from when he crashed his car into a shop window in July.