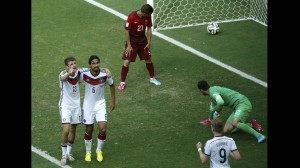 Germany won 4-0 to Portugal in a new day of World Brazil 2014 and is already shaping as a candidate for the World Cup.

The first goal of the match came in the 12th minute with a shot of Müller from the penalty spot, after Joao Pereira fouled in the area to Mario Götze.

Germany continued pressing and reached the second goal. Mats Hummels scored with a head shot after a corner kick by Toni Kroos in the 32nd minute.

At the conclusion of the first half, Germany started the made goals with another goal from Thomas Muller, this after fighting a ball in the area and strongly defined at 45 minutes. The fourth goal of the game also came from the hand of Müller, at 78 minutes.

Joachim Löw’s team was unstoppable and effectively managed the game, with Thomas Müller as featured player and Cristiano Ronaldo as lowest point of the match.