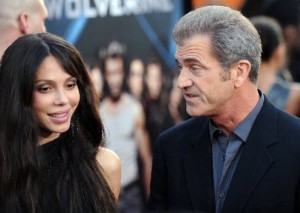 However the Russian singer affirms that Gibson hit her in the face while holding her daughter Lucia.

“I slapped Oksana once, with my hand open to try calm her and realize what she was doing. I didn’t slap her hard; I was just trying to shake her so she stopped screaming and shaking Lucia. I didn’t hit her with my fist, like she says. I have never hit her in the face, or in the temple or in any other place, not in that moment or any other occasion.” Confirmed the actor.

Gibson was afraid that her daughter suffers from the syndrome of the Shaken Baby, a neurological disorder that affects the newborns after they are shaken. According to the actor, Oksana started to move the baby in an unusual way to keep her away from him.

On June 23 of 2010 the site femalefirstco.uk made an statement to the Los Angeles Supreme Court saying that Gibson argued with Oksana on January 6, when the Russian singer grabbed the child and threatened him by saying: “Stop screaming or I’ll turn her into a mental retard!” Afterwards the actor slaps her to reconsider what she was doing. (AV)