Giovanni Lapentti is Ahead his Brother 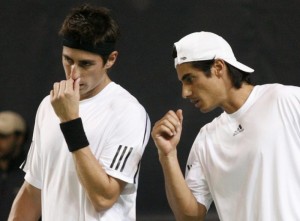 Ecuadorian tennis player Giovanni Lapentti rose from position 229 to 222 in the list published by ATP today, while his brother—who is also a tennis player— stayed in position 214.

Roger Federer (Swiss) got his second place in the tennis world ranking back today, in which Juan Monaco (Argentinean) improved. Andy Murray (British) defeated Federer in Shanghai’s semifinals and got the second position Novak Djokovic (Serbian) occupied when he won in semifinals.

Federer is behind Spanish player Rafael Nadal in the ranking, in which Argentinean tennis is the first again. Monaco—he was semifinalist in Shanghai—rose from position 41 to 26, which means he has left behind his compatriot David Nalbandian, who is in the position 31 of the world ranking.