On Tuesday the Tenth Court of Criminal Warranties of Guayas, declared Jorge Glas Viejo guilty for having raped a minor, after having been indicted on September 28, 2011 (that day he was arrested and released). The minor became pregnant and had a child.

From his hospital bed where he is being held since his return from Paraguay last May, Jorge Glas Viejo attended the hearing virtually, as part of the trial.

The procedure was reserved, while the outside of the judicial offices in the Alban Borja mall (north), a large police operation guarded the facilities.

Lawyers for the victim arrived with her to court facilities to complain that the court that should judge Glas is not impartial, said Pedro Granja; several minutes after they retired.

They refused Glas’ defense request for the little girl’s version, even though the Prosecutor suggested to avoid her presence because she needed professional psychologists questioning her. 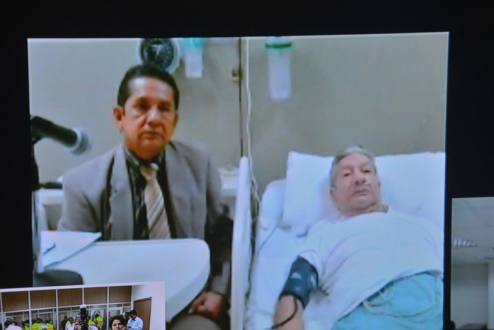 Glas Viejo gave attended the trial virtually from his bed at a hospital.