Global Blackout for the Earth Hour 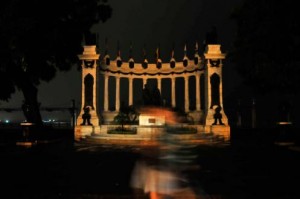 The city of Guayaquil joined the Earth Hour, leaving its most iconic sites in darkness.

The WWF, organization for the World Wide Fund for Nature, which promotes this initiative to protect the environment, held this year the ninth edition of the “Earth Hour,”which started yesterday at 20:30 with a concert of the Sydney Symphony Orchestra in Australia, whose aim is that the major cities of the world turn off their lights for one hour to raise awareness about climate change.

More than 7,000 cities of 172 countries took part in this cause, including Guayaquil, whose iconic monument of Simon Bolivar and San Martin, went dark for an hour. Both the most vulnerable to contamination, as well as the most polluting countries turned off their lights.

KISS will perform for the first time in Ecuador