Goltv ecuador branch, created by taxi driver with one dollar 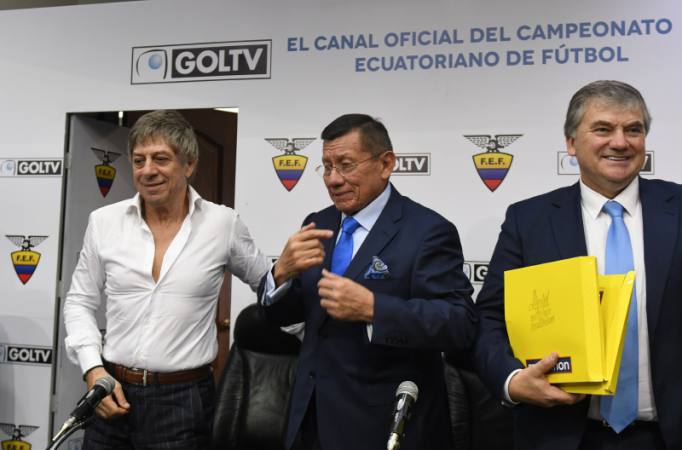 GolTV Latin America, the Uruguayan company Paco Casal that will give more than $ 270 million to the Ecuadorian Soccer Federation (FEF) for the ten-year contract of television rights of the National Championship, has a subsidiary in the country responsible for hiring personnel and negotiate the transmissions with the cable operators that was created by a taxi driver who lives in the suburb of Guayaquil and by a lawyer from Daule.

This is stated in the certificate of incorporation of the company to which newspaper EL UNIVERSO had access. There he says that Pedro Vera Ríos, a taxi driver by trade, and Linda Aguirre Franco, a lawyer who works in a law firm located in the Centro Empresarial Colón, created the company GolTV Ecuador SA with the subscribed capital of $ 12,500 before the Notary Public 61 of Guayaquil. He subscribed 12,499 shares and he just one, valued at one dollar each.

They did it on February 1, 2017, that is, six days after Carlos Villacís, as legal representative of the FEF, and Casal, owner of GolTV Latin America, signed the contract on January 26 of last year, which had an addendum to include its Ecuadorian branch, presided by the nephew of the Uruguayan magnate, Carlos Moyano Casal, whose signature also appears in the TV rights contract.

On the same day that GolTV’s subsidiary company was created in Ecuador, its first shareholders named Jaime Daniel Rodríguez Enríquez as general manager, who has no record of similar positions in other companies and has declared $ 0 of income tax in the recent five years, according to public information from the Internal Revenue Service.

Rodriguez still remains in office, according to the records of the Superintendency of Companies, despite the fact that its nominees, Vera and Aguirre, lasted only 9 months. Is that both transferred their participation to Casal and his nephew. It happened on November 13, 2017 when Vera gave her only action for one dollar to Carlos Moyano, who that day signed in Guayaquil two received, the first in his name and the second as legal representative of GolTV Latin America, which was made with the 99 % of the shares Vera had.

Three days later, Casal’s nephew was appointed president of GolTV Ecuador, which since then has as shareholders to him and his uncle’s company, which has offered to give $ 1.2 million “without anything in return” to the Federation, Villacís said, for the development of provincial associations. Lawyers who know about the labor legislation affirm that it is usual for international companies to create local companies and appoint representatives in the countries where they will operate for tax, administrative and logistics matters.

But this newspaper wanted to know why a taxi driver and a lawyer created the subsidiary company of GolTV, which was included in the contract with the FEF and which will give more than $ 270 million to clubs through this agency. That’s why he looked for the version of his previous and current shareholders, but he did not get answers with some and it was not possible to locate them to others.

Villacís, in an interview with this newspaper on Monday, said on the subject that he believes that “in that aspect the Law demands it” and asked lawyer Mario Tamayo, member of the board, present in his office, if he wants to explain it: “Because you intervened in that conformation of GolTV Ecuador”. However, the official said he will not talk about the issue.

That amount is what GolTV already paid to the FEF so that it in turn distributes it to the clubs, the executive of the Uruguayan firm, Oswaldo Jiménez, told Radio Caravana yesterday.

“We are not with our eyes closed; an executive table with delegates from the clubs will watch GolTV’s income for the championship.” Carlos Villacís, president of the FEF. (D)