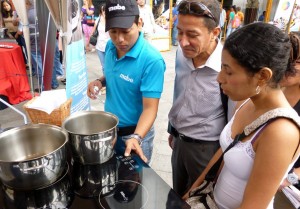 The Government yesterday asked the manufacturers of electric cookers to make “greater efforts to accelerate its production plans,” said Alexis Valencia, Undersecretary of Industrial Development of the Ministry of Industries.

“It was seen that the project started with some modest figures in production, but these are growing steadily and with the introduction of the new models,” Valencia said.

After a month of starting the registration process, there are over 26,000 enrolled in the project, said Alfredo Samaniego, Assistant Secretary for Energy Efficiency and Renewable Energy of the Ministry of Electricity.

Valencia said that 4 companies, from the 12 qualified, are in the production phase: Indurama, Fibroacero, Ecasa and Mabe.

Gabriel Garcés, Company Manager of DME, said that there are several factors that cause delay in the production.

For DME, the delay is because they already have the kits on the factory but some of these have not yet arrived and therefore they can not start with the manufacturing.

There are 20,000 enrolled in the new plan of induction cookers