Government considers that an agreement on safeguards would be close 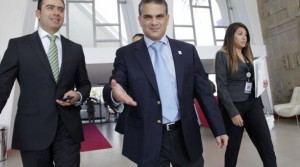 The Minister of Foreign Trade, Francisco Rivadeneira, said they have almost reached agreements with Colombia and Peru on the implementation of safeguard measures, applicable since January 5th.

This announcement was made during an interview with Democracia Radio, after two weeks of having met with his counterparts from Colombia and Peru to discuss.

Rivadeneira explained that Ecuador has the will of reducing the initial levels of safeguards. In the case of Colombia, for example, the country proposed a reduction from 21% to 17.4%, and there would be the possibility of achieving an average percentage between the proposal of Ecuador and Colombia (which proposed to bring down the safeguard measures to 7 %).

Regarding Peru, the minister gave no further explanations, because a meeting of deputy ministers of foreign trade, production and industries will be developed next week.

He added that for both countries they decided to exclude raw materials from the safeguard measures.