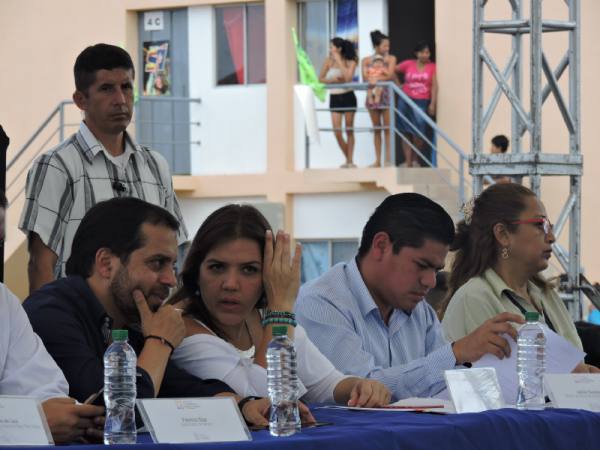 José Herrera, who had been serving as undersecretary of the Ministry of Transport and Public Works will be the new Technical Secretary of Reconstruction, replacing Carlos Bernal, who last week resigned from that position. President Lenin Moreno, who will visit the province of Manabí today, signed the corresponding decree, which coincided with the delivery of 112 houses of the Nuevo Jaramijó housing plan for the earthquake victims in that Manabi canton.

There the Vice President of the Republic, María Alejandra Vicuña, announced an investment of $ 490 million in the reconstruction process. The official said that after an analysis carried out last Monday between secretaries of State with some Manabita mayors, they identified the projects that were pending in the reconstruction issue.

In the first quarter of this year, $ 307 million will be invested, which will reactivate 15 projects pending reconstruction, while for the second quarter $ 183 million will be allocated for 28 projects. “They will be roads, fishing ports, insurance, dignified housing for our people, hospitals, health centers, are some works that from the Government of all are a priority, and above all as a commitment of the Ecuadorian State,” said Vice President Vicuña.

On the issue of housing, the second president was also explicit in pointing out that the corresponding legal actions will be taken against those builders who have failed to commit to building homes for those affected by the earthquake.

The president Lenin Moreno will preside in Portoviejo, today, the inauguration and delivery to the city of the park Las Vegas, work of the reconstruction.

It is a space of 10.7 hectares. A theater with a capacity of 4 thousand spectators is one of the eight areas contemplated by this new amusement center, which until a little over 20 years ago was the fiefdom where great international artists performed

Two places also attract attention in this work; the main one with an extension of 26,845 square meters and the event with a space of 1.2 hectares. There is also a commercial area for 28 businesses, as well as playgrounds, an outdoor gym, a wetland, a river viewpoint and a bike path, all of which were built at a cost of $ 7 million.

José Herrera, the new technical secretary of the Reconstruction, comes to replace Carlos Bernal, who resigned more than a week ago for claims against the Government, once the Finance Minister, Carlos de la Torre, recognized that $ 300 million the funds for the reconstruction of Manabí and Esmeraldas by the earthquake will be used for current payments. Days later and because of the criticism, that money returned to the corresponding account. (I)