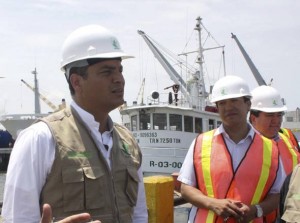 President Rafael Correa announced this morning in Manabi, which is expected eliminate the Port Authorities of Port Bolivar, Guayaquil, Manta and Esmeraldas through an executive decree and thereby become administered by a Secretariat for ports and four managers.

Correa said that the policy functions of the new regulatory body will dictate the Ministry of Transport and Public Works, adding that the new measure seeks to avoid competition between ports.

Besides is analyzed the creation of a public company for ports in order to handle the port activities with commercial sense.

“We will have a single authority that is the MTOP and four managers, managers who seek efficiency, but among the four ports are going to coordinate actions and it going to specialize ports,” said the president.