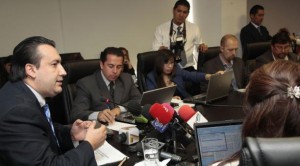 The 2015 budget does not contemplate new tax revenues, although the regime admitted that it works on two new taxes andincreasing the Special Consumption Tax (ICE for its Spanish acronym) for luxury vehicles.

The Minister of Finance, Fausto Herrera, explained that the 2015 assignments, which was sent to the Assembly on last Friday,could only record the taxes in effect. But he added: “we are working the tax on the capital gain and junk food; it is aconstitutional power of the Executive to send it to the Assembly. “