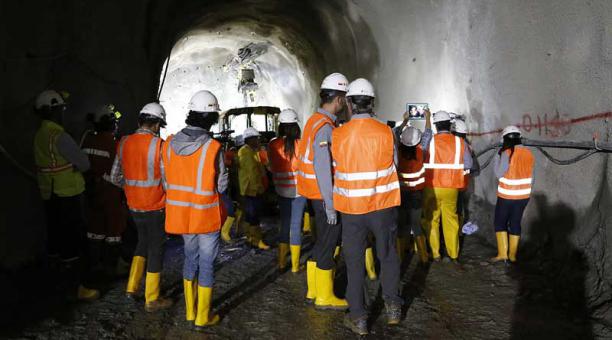 The Government proposes to reduce the tax burden paid by mining companies. The Minister of Mining, Rebeca Illescas, announced that the draft Law on attraction of investments, presented last week and that is under analysis by the Executive, proposes the elimination of the tax on extraordinary income that companies in this sector must pay, for the increase in the price of metals in the foreign market. Internationally it is known as ‘windfall tax’.

The tax, created in the previous administration, levies a tax of 70% on the difference between the sale price of the metals agreed in the contracts and the market price. For example, if the price of gold is agreed at USD 2 000 per ounce in the contract and in a few years the value rises to 2,500, the extraordinary income is 500. On this basis, 70% goes to the State and 30 %, to the enterprise. Although until now it has not generated any revenue for the Treasury because the companies are in the phase of exploration or construction of the mines, the windfall tax has been an obstacle in the arrival of new investments, said the president of the Mining Chamber of the Ecuador, Santiago Yépez.

The tax raised the tax burden for the sector to 30%, which was not attractive to mining companies, according to a study by the international company Wood Mackenzie. “President Rafael Correa had the idea that we could get to collect those resources in favor of the State, but no company came to the country,” said the Minister of Mining.

To reduce this burden, several reforms were made, especially to the windfall tax. Initially, the tax on additional income was given one month after the mining companies recovered their investments, but a reform introduced in the Capital Gains Law approved in December 2016 established that this tax begins to be charged four years after the company has recovered its investments.

Thus the fiscal burden in the mining sector was reduced to 21 and 23%. But in the referendum on February 4, the repeal of the Goodwill Law was approved and, with that, the incentives for the mining sector. In order not to affect the companies and return the profits, the Ministry believes that the exit is to eliminate the ‘windfall tax’. “That does not mean that we are going to stop raising, but that we are making the sector more attractive,” said Illescas.

For the mining union the measure will be: “important incentive”. Yépez explains that in the absence of a similar norm in any country in the world, this tends to generate a problem, since the investor does not see attractive to invest if there is an excessive tax burden. The idea is to present the Law of attraction of investments during the first week of March, within an urgent economic project, explained the Minister of Foreign Trade, Pablo Campana.

Another issue that generates concern in the sector is the suspension of the delivery of mining concessions. Two years ago, the Ministry of Mining launched the mining cadastre, a registry of the concessioned, reserved and free mining areas existing in the country, and allowed for the delivery of 275 new concessions for exploration. But President Lenin Moreno asked, on December 11, to suspend the delivery of concessions while not meeting all the requirements, such as prior consultation with the communities.

The Minister of Mining clarified that it is a temporary suspension and not a “moratorium” or a brake on the industry.

He explained that the measure, which is provided for in the Mining Law, has two objectives. The first is to review the historical concessions that were awarded until 2016, but whose petitioners did not continue with the regularization of these requests. There are cases where the concessions were closed, but the registration was not made.

The Ministry of the Environment and the Water Secretariat are also working on this revision. And, second, says the Minister, it will be reviewed that after December 11, no areas have been given, as the President ordered. So far this has not been detected. For Yépez, the suspension obeyed the political pressure of anti-mining groups in the middle of the campaign for the popular consultation.

The executive considered that it is good to review the auction process for the delivery of concessions, which should be improved, but a revision of the concessions already delivered is a concern. “It is a sign of possible legal uncertainty.”

On February 4, the repeal of the Goodwill Law was approved. The standard includes a transitional provision with incentives for mining, which will also be eliminated once it is discussed in the Assembly. (I)