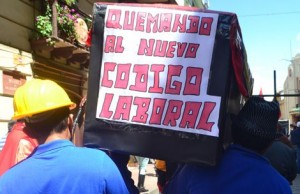 President Rafael Correa called on his supporters to gather in front of the presidential palace on Wednesday, the same day that workers and indigenous sectors plan to protest against the labor policies.

Workers, indigenous, doctors and students sectors foresee to march in Quito on Wednesday in protest against the government, which promotes a new labour code that will place limits on wages.

“If they are 3,000 on Wednesday, we will be 30,000 in the Plaza Grande. Everyone is invited to the Plaza Grande with joy, It going to be a musical festival,” said the president, adding that will intervene with union leaders at the meeting of officialdom.

The opposition “believe they going to impress us. They neither know the code because it is not even officially presented (…)” they want “to be incorporate to negotiate and negotiate is that they impose their whims. They’re simply wrong,” he said.