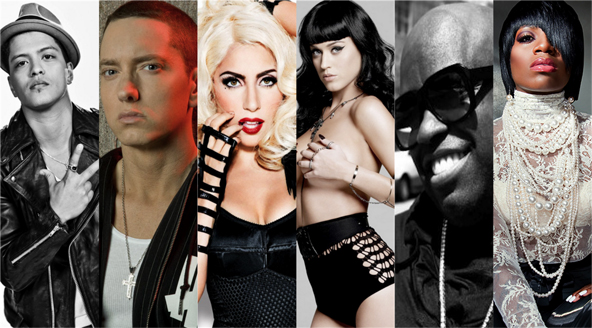 The 53rd Grammy Awards ceremony was held at the Staples Center in Los Angeles last night, musical personalities became the trending topics on Twitter while the show was being broadcasted live.

The ceremony honored 109 categories and many artists gathered to watch and give amazing performances. Christina Aguilera opened the show by singing a tribute to the Queen of Soul Aretha Franklin, who is recovering from surgery. Florence Welch (Florence and The Machine), Jennifer Hudson, Yolanda Adams and Martina McBride joined Aguilera in the performance.

The always eccentric Lady Gaga hit the stage inside a giant egg carried by her dancers and then emerged to the stage and performed her new single “BornThis Way.”

The night became colorful when the actress Gwyneth Paltrow took the stage with Cee Lo Green singing “Forget You” surrounded by puppets instead of dancers.

Another surprise of the night was the legendary former Rolling Stones lead singer Mick Jagger, who moved his hips with lots of energy to perform “Everybody Needs Somebody To Love”, a tribute to Solomon Burke, who died last year.

The rapper Eminem led nominations with 10, however,  he had to conform with two awards, Best rap album for “Recovery” and best rap solo performance for “Not Afraid.” Hawaiian Bruno Mars followed with seven nominations, taking the statuette for Best Male Rock Vocal Performance for “Just The Way You Are.”

Country trio Lady Antebellum was the big winner of the night, taking home five awards, including song of the year and record of the year for “Need You Now.”

The winner on the Best new artist category, singer and bassist Esperanza Spalding surprised the audience since she left behing teen’s favorite Justin Bieber and Drake, becoming the first jazz artist to win this prize.

Among the Latin artists who were honored with awards was the Spanish singer Alejandro Sanz, who won the award for best Latin pop album for “Paraiso Express” and the Mexican band Grupo Fantasma, who won the prize for best album of alternative rock and urban music.