Greater support for Scottish independence is recorded in surveys 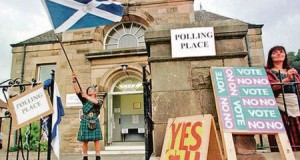 According to polls, the support for the independence of Scotland from Britain rose 8 points since August, in order to be an independent country.

An opinion poll conducted by YouGov consultant, 2 weeks from the referendum in the country, showed that 53% of respondents oppose to a secession from the United Kingdom, while 47% would be in favor. The 6-point difference between the two groups, which excludes the undecided, was of 14 points in mid-August.

Blair Jenkins, Executive Director of the Campaign ‘Yes Scotland’, said: “This report shows that the Yes gains momentum. We only need to achieve 3 points of advantage for the Yes to win”.

On September 18, the Scots will vote in the query, answering the question: “Should Scotland be an independent country? Yes or no”.