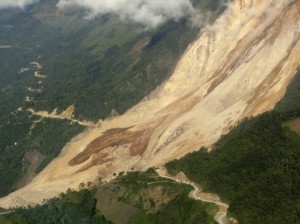 Guatemala City, The tropical depression and the heavy rains caused landslides that killed at least 37 people. On Sunday the country’s emergency services said that it could claim as many as 100 lives.

In addition, there are reports of 30 people injured and 23 more are missing including rescuers who where trying to save the people buried under a wall of mud. The torrential rains of the weekend caused hillsides to collapse. President Alvaro Colom declared on Saturday a national emergency, later he told the media that parts of the Inter-American Highway are closed after the rain took out entire sections of the road and caused two accidents.

The first landslide was near kilometer marker 82 and claimed the lives of 12 people when their bus was buried. The falling mud also appeared at kilometer marker 171 knocking a number of vehicles and a bus off the road. Nearby residents hurried to the scene to help but a second mudslide crashed down on the same place, said Suagustino Pascual Tuy, a Nahual police officer.

Authorities have recovered 37 bodies throughout the country but the officials said that more are expected. The infrastructure and fields crops where damaged by the heavy rains and it also destroyed thousands of houses.

An estimate of 42,000 people have been affected, additionally more than 10,000 are being evacuated from the area, said emergency spokesman David De Leon Villeda. A total of 7,000 people are housed in shelters. In May the Tropical Storm Agatha hit Guatemala, its torrential rains fell for months and caused the death of more than 150 people.

The area was visited by President Alvaro Colom who proclaimed that the following day would be declared a national day of mourning.