Guayaquil, attractive for the ‘euro-asian’ route 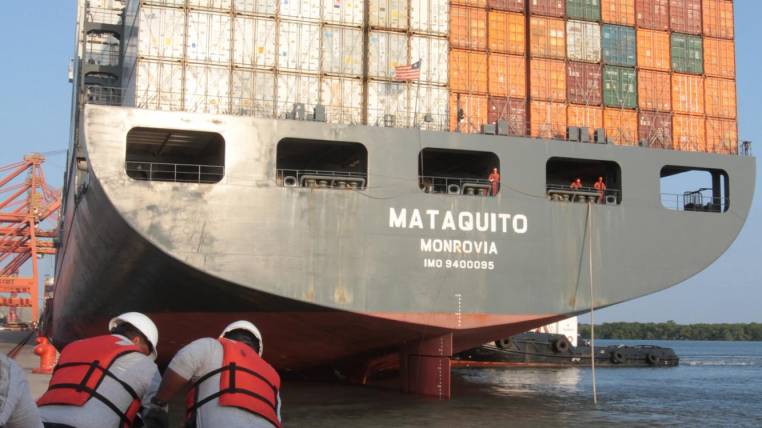 These are key days for the development of logistics in foreign trade. Everything is ready to summon international companies to deepen the access channel that leads to the most important ports, where 1.82 million containers are handled.

And, in maximum 45 days, under the guidelines of the President of the Republic, Lenin Moreno, the Ministry of Transportation (MTOP), through the Public Private Partnership mechanism, will do the same for the construction of the Puente del Sur, “which will save the less an hour of trip to the trucks and 5.6 dollars in toll “, says to the EXPRESS the manager of Port Authority (APG), Guido Ferreti.

The access channel will have 12.5 meters draft at low tide (two more at high tide) and will arrive from Posorja to the private terminals enabled and the Simón Bolívar state port managed by Contecon.

The Puente del Sur begins in the Guasmo (Cacique Tomalá Avenue) and arrives (with a fork) to the Durán-Boliche road) and another one near Puerto Inca (Naranjal). The initiative was created by the company Daimond Consulting, which has the resources to make the investment of $ 1,200 million.

These two axes are the core of the Port Development Plan, which includes the rehabilitation of the locks, the Higher Institute, the Container Warehouse Center, the Contecon logistics area, the Special Development Zone (ZEDE) and the shipyard.

These days, China’s interest in this Guayaquil project was also generated and thus enhance what it calls “a strip, a route” to strengthen the connectivity between China and Latin America and which it complements with the “Silk Road” that connects through a railway line to Yiwu with Madrid.

The great area In the Zede APG expects to approve the tax benefits “important for development (not imposed on the outflow of capital, not Income Tax for at least the first 5 years, among others). The installation of foreign industries is also expected.

He is the general manager of the Port Authority of Guayaquil (APG), responsible for port policy in the most important area of the country. Guayaquil has called for investment. For 20 years it has been invested in docks, mega-ship cranes and state-of-the-art technology. They have done it Contecon (concessionaire of the state port), the private terminals Naportec, TPG, Fertisa and others that are in the Guayas river; and DP World does it, in Posorja.

What expectations does the Port Authority have regarding the impact of the Port Development Plan?

It is not a work only of APG. We plan with Minister Paúl Granda and Mayor Jaime Nebot. We have the great possibility of turning Guayaquil into the port city of this part of the Pacific and generating 20 thousand direct jobs. A commercial agreement with the United States opens up this possibility even more.

Access to the ‘Silk Road’ of China, is it feasible?

China is interested in Guayaquil throughout the Development Plan. Only with this opportunity, in addition to the agreement that will be negotiated with North America, the cargo can grow significantly in the future.

When repairing the locks, containers can be carried on barges along the Guayas River .

By recovering the locks, we will be able to promote certain private projects and initiatives, such as the massive transportation of containers through barges to docks in the Guayas, generating significant savings for the productive sector. We seek to lower costs in the port logistics chain.

The shipyard, has it generated interest?

We already have interested parties from several countries and also from Astinave and another Ecuadorian company.

Guayaquil has called for investment. For 20 years it has been invested in docks, mega-ship cranes and state-of-the-art technology. They have done it Contecon (concessionaire of the state port), the private terminals Naportec, TPG, Fertisa and others that are in the Guayas river; and DP World does it, in Posorja. (I)