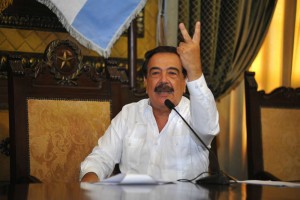 He said that when he was elected mayor in 2001 he adjusted his business activities and declarations of income tax based on what the Organic Law on Public Service orders.

“Obviously I have not lived, nor live from my salary as mayor, which was $ 1,136.26 per month in 2001 and $ 4,730.06 per month during 2014. Therefore, you must add to the aforementioned salary the revenues corresponding the operation and distribution of the profits of the family company Ingersa,” he said.

On the other hand, the mayor denounced a photo published by the Secretary of Communication, Fernando Alvarado, he states was digitally manipulated.

In the photo the mayor making an obscene gesture with his hand during a demonstration is observed. The secretary indicated under the photo: “@jaimenebotsaadi and the “sign” to defend his 2%. If the person in the photo was @MashiRafael it would be the cover of @eluniversocom.”

Nebot showed the original photo in which he is seen making the sign of victory and clarified that this was taken in 2005 during a protest against Lucio Gutierrez, and is not about the march that was held last Thursday at the 9 de Octubre avenue. In addition, he appears next to Bishop Federico Gagliardo Baquerizo, Salesian priest who died in 2010.

Alvarado deleted the image and apologized after the claim of the twitterers.