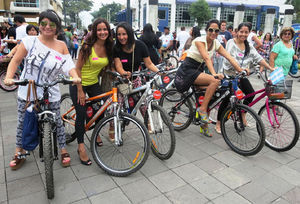 Guayaquil women cycled all over the downtown on their heels

With the slogan ‘For a less violent city’, last saturday afternoon started in Guayaquil the event called “Rolling in height”, in order to promote respect for women in the streets.

This event was organized by the group Guayaquil in Bici (Guayaquil on bike), who spread the use of bicycles as transportation and work towards a driver education awareness. “This event was born in Mexico, it is carried out simultaneously in several cities in Latin America. In Ecuador this is the third year”, said Blanca Rivera, a member of that organization.

So a bike ride was held through downtown with the characteristic that women were called to wear a dress and heels.

The world´s richest men according to Forbes