Guillermo Lasso assures that $1,000 million in productive loans will be delivered at 1% through BanEcuador

The President of the Republic, Guillermo Lasso announced this morning that a total of $ 1,000 million will be delivered in loans at 1% and a term of up to 30 years. He did it this morning, at the Cantonal Agricultural Center of Latacunga, where a public act was held in which 20 people were given symbolic checks for the credits awarded to them. These credits have low amounts of $ 500 to 5,000. 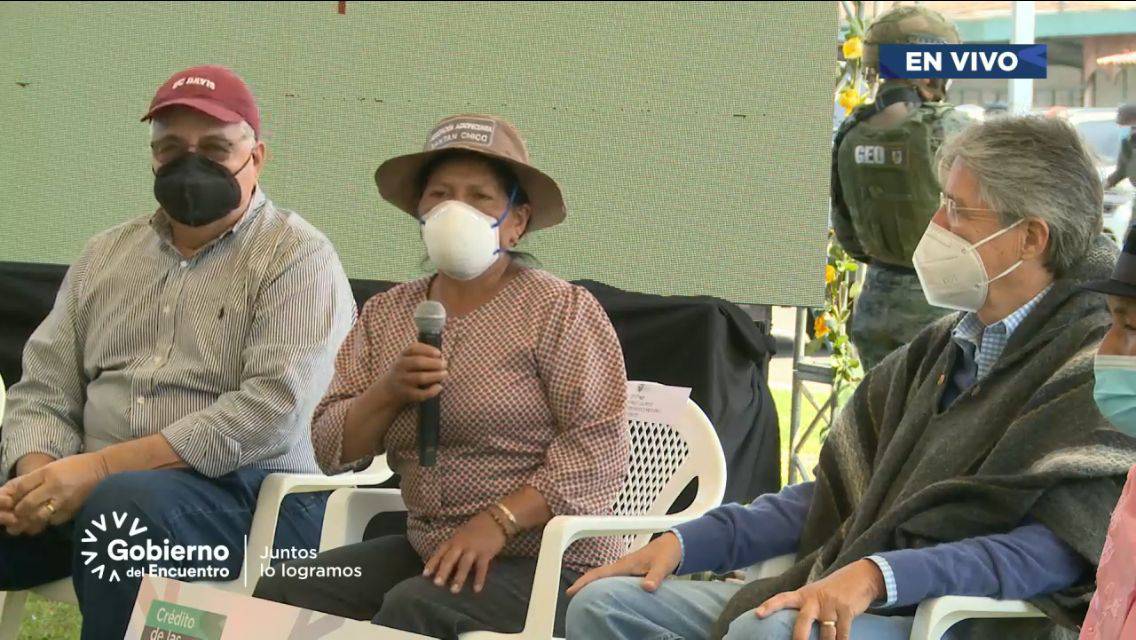 Gladis de la Cruz de Santán Chico received one of the productive credits at 1%, in a launching ceremony attended by beneficiaries and government authorities.

President Lasso also assured that this year the Government will begin the great mobilization for the reactivation of the economy: “it is the largest economic reactivation operation because it is dedicated to traditionally neglected sectors,” he said.

The president did not mention the time frame in which the $ 1 billion will be delivered, but previously Secom had indicated that $ 100 million would be delivered in 2022.

One of the beneficiaries of the new loan is Gladis Rosario de la Cruz Almache, a producer from Santán Chico. She, who received $ 3,000, thanked the president and said that with this type of action they perceive that the meeting and the offered change are being fulfilled. She assured that as farmers they have not abandoned the countryside or migrated to the city, and rather they continue to fight. He was against the strikes, because he said with them all the fruit of his work is lost. “The strikes affect us, they are not convenient for us, the milk in strikes throws us into the streets, they flatten our tires.” In this sense, he asked the authorities not to allow it.

For his part, Lasso asked the beneficiaries of the loans to take the new loan as a tool to reactivate the popular economy. He invited them to come to the BanEcuador offices and without paying any type of intermediary, present their business plan and access what he called “the cheapest credit in the world.” He ratified that in the Government of the Encounter “what is said, done and what is promised, is fulfilled” and recalled the case of Dalia Cortez, the first citizen who received the loan for $ 5,000 for a 27-year term, on May 3. last January. She assured me that the credit is so convenient that she will pay 324 monthly installments of $ 15.43. Chulqueros who have wanted to charge up to 20% per month are no longer needed, commented the president.

He also said that it is encouraging to start the year with this type of excellent news for thousands of low-income Ecuadorians. He said that this measure shows what the government’s priorities are. Support for poor sectors of the population. He assured that he was accused that he was only going to worry about the rich, but that he has shown with vaccination, wage increases and other policies, that this is not his objective.

Additionally, he ratified that the country will not be confined again, since it is located among the 10 countries in the world that has already achieved a vaccination of 80% of the population with two doses, which allows it to face new variants and that it can continue with the economic reactivation plans. He asked the population to go to get vaccinated with the booster and assured that the Government has the necessary vaccines for it. He reminded the population to continue with biosecurity measures such as the use of masks, hand washing, use of alcohol and social distancing.

Lasso also commented that in previous governments the delivery of credits was not exactly directed to the poor. And he recalled, without giving names, the case of a person who received $ 100 million from the National Finance Corporation. He condemned this fact and said that this money could have boosted the economy of hundreds of thousands of producers.

The manager of BanEcuador, Mauricio Salem, for his part, said that it is providing long-term productive loans at low cost. But the characteristics established by President Lasso are also fulfilled: paperwork 0, corruption 0 and intermediaries 0. He revealed that in BanEcuador, unfortunately, there has been a toll policy, through which citizens have been victims of unscrupulousness. He explains that now this is being fought and complaint lines have been set up.

The Minister of Agriculture, Pedro Álava González explained that this type of credit seeks to encourage agricultural activity and the generation of employment.